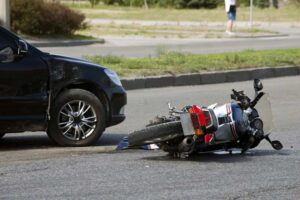 While riding a motorcycle can be a thrilling way to get around in Georgia, particularly in good weather, it can also be dangerous. According to the National Highway Traffic Safety Administration (NHTSA), 5,014 motorcyclists were killed in just one recent year. Motorcyclists were roughly 29 times more likely to be killed in a traffic accident than occupants of passenger vehicles.

If you’ve been injured in a motorcycle accident caused by someone else, help is available. The Gainesville motorcycle accident attorneys at Weaver Law Firm have the knowledge and experience to help you hold the at-fault party accountable for their negligence and pursue the compensation you deserve.

Contact Weaver Law Firm today to discuss your case. We offer a free consultation so you can review your legal options with a member of our team.

Do You Have a Motorcycle Accident Claim?

Georgia is a “fault” state for auto insurance, which means if you are injured in an accident caused by someone else, you have a legal right to file an accident claim against the driver whose negligence led to the crash. In Georgia, the at-fault driver is liable for the losses resulting from the accident.

As long as you can show that the other party was responsible for the crash due to their carelessness or other legal fault, you can pursue compensation from them through an insurance claim or personal injury lawsuit.

How Is Fault Determined for a Motorcycle Crash in Gainesville?

Determining fault in a motorcycle crash can be challenging, especially if the person who caused the accident refuses to accept liability or tries to shift the blame to you. You need the assistance of an experienced personal injury attorney to conduct a full investigation into the accident and gather evidence that establishes liability.

You will need to show that the other party was negligent to prove liability. Negligence has several components. First, you need to demonstrate that the driver who hit you had an obligation to use reasonable care to avoid causing you harm. Second, you must show that the motorist failed to uphold that obligation through some form of negligence. For instance, if they ran a red light and rammed into you as you were legally crossing an intersection, that could be negligence.

Third, you need to demonstrate that because the driver was negligent, they caused the accident that resulted in your injuries. In the above scenario, your attorney might be able to use traffic camera footage and witness statements to prove that the driver ran a red light, thereby causing the crash that resulted in you being harmed.

The Most Common Causes of Motorcycle Accidents

Some of the most common causes of motorcycle crashes include:

Because motorcycles aren’t nearly as big as passenger cars, trucks, and buses, motorists may sometimes fail to notice motorcycles at all. Driver negligence plays a major role in most traffic accidents, and motorcycle accidents are no exception.

Unlike other motorists, who can rely on safety features like airbags and seat belts to protect them from the force of a collision, motorcyclists have little more than their helmets and clothes. As a result, motorcycle riders are usually directly impacted during a crash. In some instances, they may even be thrown from their bikes, sustaining severe injuries.

Some of the most common injuries motorcyclists suffer include:

If you were injured in a motorcycle accident, it’s important to seek medical attention as soon as possible. Some types of injuries, like internal organ damage, aren’t always immediately obvious, but a doctor may be able to detect them before complications develop.

According to the Georgia Department of Driver Services (DDS), motorcycle accident deaths have increased in recent years. They note that motorcycle accident fatalities rose from 139 to 179 in a recent four-year period, an increase of nearly 30 percent.

What Compensation Can Be Recovered After a Motorcycle Wreck?

You could be eligible to recover compensation if you were injured in a motorcycle wreck caused by another person’s negligence. Through a third-party insurance claim or personal injury lawsuit, you could seek compensation for:

You shouldn’t have to navigate the claims process on your own, especially while you are injured. A motorcycle accident attorney can handle all communications with the insurance company and negotiate aggressively for settlement on your behalf. A skilled attorney can leverage the strength of the case they build for you to seek the full and fair compensation you deserve.

Statute of Limitations on Motorcycle Accident Lawsuits in Gainesville

Georgia has a two-year statute of limitations for motorcycle accident lawsuits. You must file your lawsuit within this time frame, otherwise a court will probably dismiss your case. While most personal injury cases settle before a lawsuit is ever filed, it’s important to remember that the clock usually starts ticking on the day you suffered your injuries. If you cannot reach a settlement agreement with the insurance company, then you will need to file a lawsuit before the deadline passes.

Are you a motorcyclist who was injured in an accident due to another driver’s negligence? If so, contact the Gainesville motorcycle accident lawyers at Weaver Law Firm today. We have extensive experience helping victims of motorcycle crashes pursue the compensation they need to get their life back on track after an accident.

What Happens If You’re Involved in a Drunk Driving Accident?

If you have been involved in a collision with a driver who was under the influence of alcohol, you might be wondering what rights you may have to compensation.  Drunk driving is against the law, and it is clearly a...